At Sports Centre Triglav Pokljuka all of you will be able to recognise your second home. With all the necessary care we have foreseen even the slightest of details in order to make your stay in Rudno polje a perfect pleasure. The functionally designed and modernly furnished Center Hotel can fulfil various wishes and needs in all seasons.

The Centre is operational 365 days per year; the opening hours of the Center Hotel and its à la carte restaurant are adapted to this regime. The Centre is not intended solely for fulfilling the needs of elite and recreational athletes, but is open for all tourists wishing to spend a few of their free days surrounded by untamed nature or who perhaps visit it simply as a guest for one day. You are all most welcome at the Centre and will be received as our dear guests.

After slightly over a year of construction, the Centre was built in October 2009. The Minister of Education and Sport of the RS, Dr Igor Lukšič, and the Chairman of the Biathlon Assembly at SAS, Peter Zupan, symbolically cut the ribbon on 13th October 2009 and opened a new Slovenian sports and tourist acquisition that everyone was already anxiously waiting for. Thus an investment worth ten million euros emerged in Rudno polje; it was also financed by the European Regional Development Fund with 6.5 million. The remaining sum was contributed by Fundacija za šport [Sports Foundation] and the Ski Association of Slovenia, which is the manager of the Centre through the company Center Pokljuka d.o.o. and its 100-percent owner.

Construction of Sports Centre Triglav Pokljuka fully followed strict environmental demands; we are aware that the Centre lies within the Triglav National Park, which is why coexistence with nature and the park is ever so important. The Centre strives to burden the natural environment as little as possible and fuse with it as much as possible, which is why the planning stage, and later the execution stage, made sure that:

• a new treatment plant was built,

• wood chips were used for heating,

• a system of rational use of water resources was used,

• the forest edge was afforested and the trails and other surfaces on which work was carried out were grassed, and the construction site fully rehabilitated,

• parking areas with oil separators were set up,

• the trails and the stadium were illuminated to a minimum in order to reduce light pollution,

• there is a special regime for covering with artificial snow and carrying out competitions, taking into account the noise limit values,

• monitoring of the impact on capercaillie breeding grounds is carried out (for a period of 10 years). 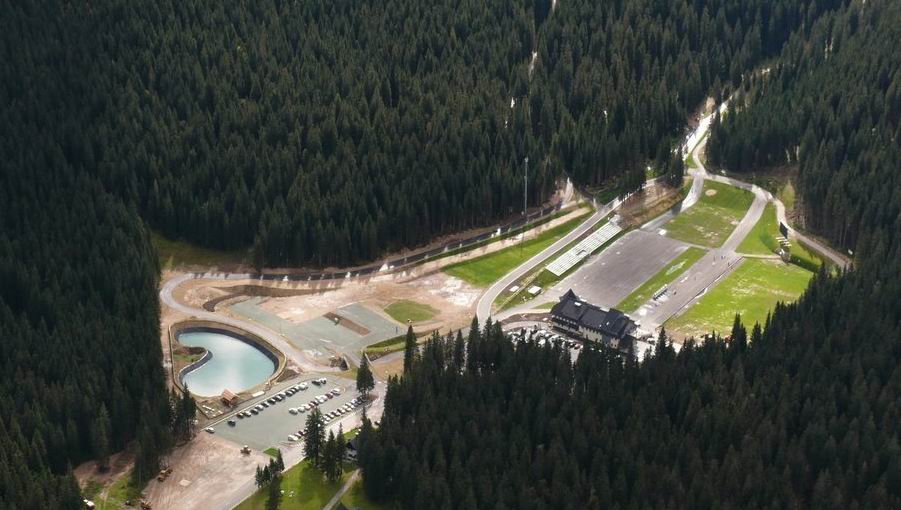